Charts and Graphs and Polls, Oh My.

Well, it's almost time for the federal election, thank god.

Two reasons for relief:
The polls have been interesting, with lots of movement. I have some numbers from Three Hundred Eight from late August to now, and boy-howdy, there have been some changes. Since I like pictures, we're gonna have some pictures. And, because Ontario is the only province that matters (heh), that's what we're looking at. 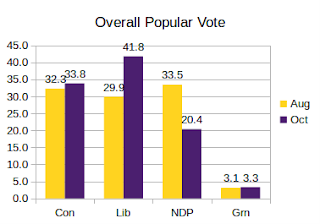 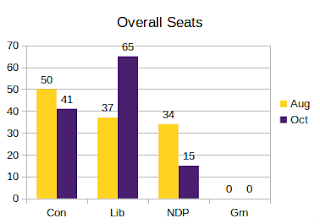 The big thing you'll see first is the surge in Liberal support, both in the popular vote and in the number of seats. Most of this appears to be coming from the NDP, as the Conservative numbers are roughly steady... however, even though the popular vote for the Cons is up a tick, their seat count goes down by 9. More on this later.

But... wow, that NDP. Amazing. They were flying high back in the summer, but now? Huge drop in support. Astonishing.

I figured a finer-grained analysis would be in order, so I classified each riding as being either (a.) in a major city such as Toronto, Hamilton or Ottawa; (b.) in a suburb of those cities; (c.) in a smaller city such as London, Windsor or North Bay; or (d.) largely rural. Let's take a look, shall we? 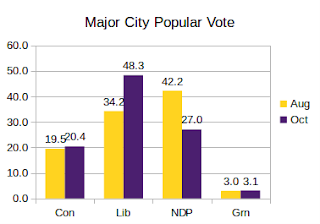 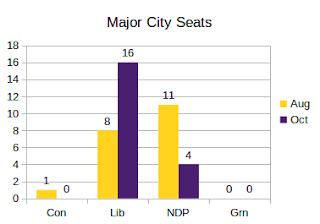 As expected, in big cities there's not a lot of Conservative support (and the seats reflect that). Liberal and NDP trends mirror each other, so that's probably the major change we're seeing here. 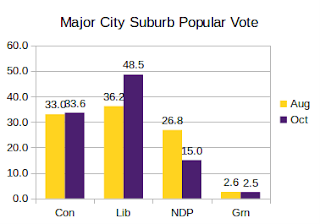 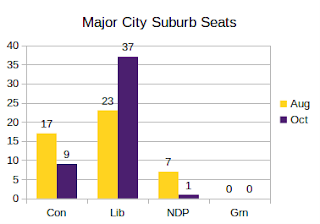 In the summer, it was a fairly tight three-way race, with the Cons and Libs roughly equal and the NDP scooping a few seats. Now, though? Liberals absolutely dominate the seats, despite only picking up a dozen points in the polls. To me, that means there were a lot of close races that could've tipped any way, but now the Libs have picked up just enough to go ahead in those individual races. 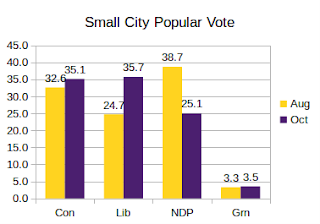 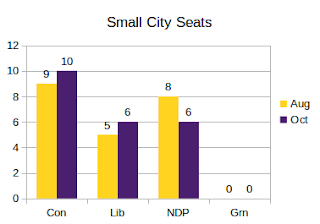 There's not a whole lot of movement here in seats, despite the Liberals picking up a dozen points (and the NDP losing 13). My guess is that there are mostly fairly clearly-cut races, but the gaps are tightening. The NDP have to hope to not slide down far enough to lose any more of those potential seats; for them, the election can't come soon enough. 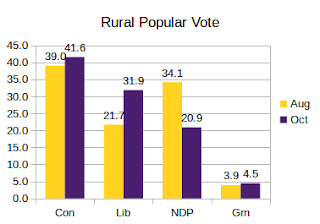 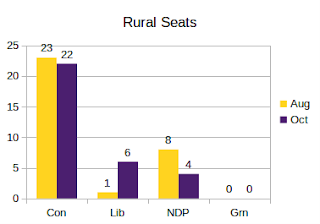 Rural Ontario had, for me, a surprising amount of NDP support early on; a lot of this was in the north. But now, yikes -- the 13 points they lost went almost entirely to the Liberals. Unsurprisingly, the Conservatives were going to take a lot of these ridings, and it doesn't look like that's going to change between now and Monday.

How about different parts of the province, though? Similarly, I broke ridings into five big categories: (a.) the Golden Horseshoe, (b.) northern Ontario, (c.) southeastern Ontario, (d.) southwestern Ontario, and (e.) the central bits in-between all those other places. Naturally, there's a lot of overlap between groups: the GTHA is mostly urban and surbuban, and the southwest is mostly rural and small-city. 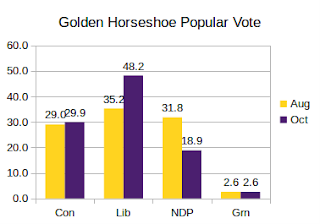 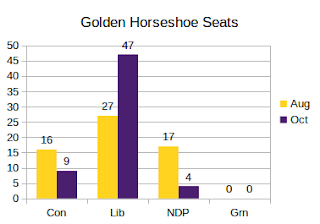 Wow, wow, wow. If you'd have told me that the NDP were going to get a countable-on-one-hand number of seats in all the big cities in Ontario, I'd have thought you were nuts. But, things are looking that way -- and the Liberals are there to scoop 'em all up, and steal some from the Cons for good measure. 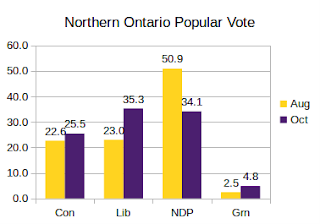 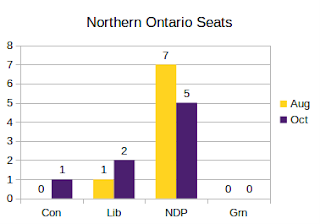 In the north, the NDP still dominate the seat count, despite losing a whopping 16 points in popular vote. A lot of that support went to the Libs, and even the Cons look to pick up a seat (in Kenora, but they're leading by 0.1%, so it could go either way, really). 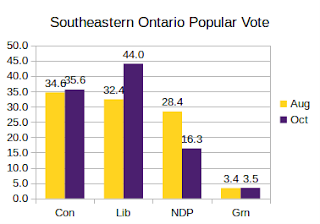 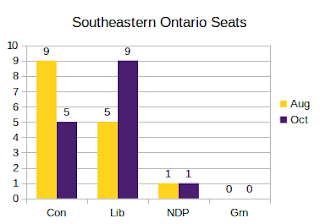 The NDP didn't start off with anything other than Ottawa Centre, and that's where they're staying. Their support in other ridings has evaporated, and the Liberals have picked up enough potential votes to edge ahead of the Cons in four ridings. 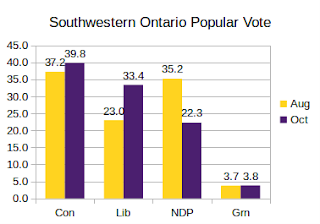 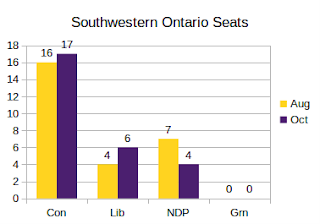 If my grandfather was still alive, he'd have voted Conservative if the devil himself was the candidate -- and that's true of the rest of the southwest. Despite the popular vote being somewhat close-ish, these ridings are very polarized: places like Lambton-Kent-Middlesex are incredibly Conservative, Windsor is a sea of solid orange, and places like London North Centre and Guelph are insanely Liberal. People were fairly well decided a while ago here. 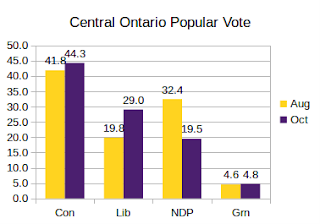 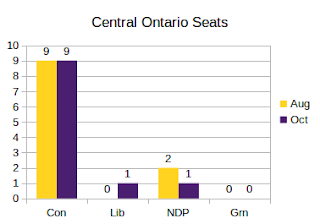 ...as is the case in central Ontario, too. The Cons are going to get a lot of seats here, and the Libs and NDP are fighting for a couple of scraps.

So, there you have it. Two days to go, and things have been changing... not so well for the NDP, and incredibly well for the Liberals. Eric Grenier, the guy behind 308 and a guest on The House this morning on the CBC, described Conservative support as having a fairly low ceiling but a high floor; the numbers in Ontario bear this out.

The moral of the story is, Fuck you, Steve.
Posted by JTL at 3:02 PM No comments:

Email ThisBlogThis!Share to TwitterShare to FacebookShare to Pinterest
Labels: politicking

It's not every day when you can say you've attended a wedding and a funeral within the span of a week. (It's also rarer to have a lunar eclipse in between the two, too, I imagine.)

My old buddy Jake, who worked on a certain campus humour newspaper with me about a decade ago, got married to the lovely Lauren on Saturday. The service was in a little tiny church in the country; apparently everyone in Jake's family got married there, and he wasn't going to let this tradition get tarnished by him missing out. The reception was held at a golf course just outside Barrie, and it was delightful.

I haven't spent much time in churches over the past couple of decades. Most of that time has been either for weddings or my niece's First Communion, if that's what's it's called; she was 8-ish and wore a white dress, which is fucking creepy because it looked like a wedding dress, and really, who's marrying at 8?

Anyway, churches make me think about religion as a whole, and my relationship with it. I had a little time to kill while sitting in the pew before the ceremony started, so I took out this little book that's in (I presume most) Catholic churches which explains how this-or-that rite is performed, outlining the various steps and using arcane and opaque terminology that I didn't really understand, along with a couple hundred hymns.

On the one hand, it's a very powerful experience, this religion thing. I was once under its spell and it felt pretty real and complete, and I will admit, it's pretty alluring to think that people have figured out how it all gets wrapped up for eternity.

But on the other hand, if you have two thousand years to perfect a ceremony, set of literature, catchy songs that keep kids interested and singing-along, it'd better feel real and seem complete, or else you've just been wasting your time. Add in humans' proclivity for making connections even when there aren't any to be made, and you've got yourself a religion, pal.

Because I don't consider myself part of Christianity anymore, maybe I saw the ceremony through a different, more-sceptical set of eyes than a lot of people in the room. What I saw was a father walking his possession down the aisle, dressed in white to give off the impression she'd never fucked anyone before (I'm not judging either way, but seriously, it's 2015, who hasn't fucked?), and giving said possession to another man to take care of, presumably until one of them dies or gets tired of picking-up after the other. Dad almost said to groom, "Well, here are the keys, don't drive her too rough in the winter, I changed the oil every 5000 miles."

Naturally, I'm an asshole for thinking and writing this. And, am I bitter that my romantic life hasn't turned out the way I'd hoped/wished so far? You'd better believe it, buster. Still, though, the symbolism is weird and creepy, and I hope that if I get married someday, it's going to look NOTHING like that.

The reception was fun. I was seated at a table with a lot of the bride's friends, who were all up from the US and had never seen Nanaimo bars or butter tarts before. (They loved them both.) Another of her friends, who was at another table, was hitting on me whenever she could, I think, but... ehhh.... I wasn't feelin' it. I nearly pulled an Irish Exit and just split without telling anyone, but I had to give the new couple my best on the way out, and felt guilty without saying a quick goodbye to the Americans.

My last grandparent (my maternal grandfather) passed away in his sleep early on Tuesday morning. He was 95-and-change, and up until just before turning 95 was in pretty damn good health, and always has been. My brother and I joked with a few people today that it looks like we've got pretty good genes, as far as longevity goes.

I left Toronto just after 7 this morning, picked up my brother in Woodstock, and we arrived at our parents' place whereupon we changed into suits and headed up to the funeral home. There was a wake/visitation before the actual funeral itself, and my brother and I saw some people that we hadn't seen in decades: people our parents' generation who looked vaguely familiar, but I usually couldn't put a name to the face, which made me feel pretty terrible, and also no longer really part of that community, which stings.

The service was lovely, as the minister from the church my grandparents went to presided. They were fairly religious, so there were numerous scripture readings and possibly the longest prayer I've ever witnessed. A small choir also sang "How Great Thou Art," which kinda fits. But there were also moments of levity where the minister slipped in a couple of well-placed and tasteful moments of whimsy; I hesitate to say he cracked a joke, but maybe one could say he did. Also, said choir sang an a cappella version of grandpa's favourite song, "Don't Sit Under The Apple Tree (With Anyone Else But Me)," which seemed a little weird at first but then totally made sense, as he was a huge fan of music all his life and played in a band for years.

The four grandsons and two family friends were pallbearers; my brother and I did this for the first time last year when our uncle died, so we weren't rookies. When I was a kid, I remember my dad mentioning here-and-there when he'd fill that role in a funeral, and I remember thinking that was just about the most grown-up thing anyone could ever be asked to do. (I guess that makes me really grown-up, then.)

There was a short service right beside the grave, and then we went back to my grandparents' church for some light refreshments. I talked a little more in-depth with a few of my relatives and family friends, which was nice; a couple of them remarked that they "didn't see a lot of [me] anymore" which, again, kinda stings. But, y'know, in my defence, anyone who lives as far away as I do -- and I'm hardly alone in this, I'm sure of it -- isn't going to be hanging around the ol' homestead every weekend. I'm trying to make a life of my own, and while it'd be nice to visit more often... ehhh, I'm just probably going to fill this space with excuses, so I might as well just cut it out now.

So, there you have it: six days, one wedding, one eclipse, one funeral. Two of those events occurred under clear skies.
Posted by JTL at 7:02 PM No comments: