The following post may be too much for some musically-sensitive people to handle.
If your record collection contains several albums' worth of prog-rock,
cool jazz from the '50s or anything by the Pixies,
reader discretion is strongly advised.

So there's this song, you see.

This song is called "Call Me Maybe," and it's done by a singer named Carly Rae Jepsen. Surprisingly for a pop song these days, she co-wrote it; now, whether she just came up with a couple of lines in the middle of the thing or she wrote the bulk of the music and lyrics, I'm not sure, but her name's on the credits, and that's more than I've ever been able to do.

By all accounts, I should hate it.

I think a main source of this catchiness is the lyrical flow in the chorus -- some words linger, but other ones are chopped-up and spat out staccato-style, and if you can hang on to all of 'em, it can be very satisfying for the listener.

Words in songs give the listener something to hang their hat on; if you have a guitar you can play along with a song, but most people don't carry one everywhere they go (except that hippie dude in your residence who thought that and a soul patch was all you need to get laid (and he very probably got laid more than I did in uni, but whatever)), so singing is easy and portable. It makes you feel good because connects you with the song very directly in a melodic way; dancing does the same thing, but in a large-motor-skill way.

It's not what I'd normally listen to. And frankly, I don't believe I've ever sat around and thought, "That 'Call Me Maybe' song, that'd really hit the spot right about now." But it's good at what it does, and in the right environment (e.g. in a fire-code-violatingly-jam-packed New Year's Eve house party at five minutes to midnight), it can be a hell of a lot of fun.

Email ThisBlogThis!Share to TwitterShare to FacebookShare to Pinterest
Labels: music 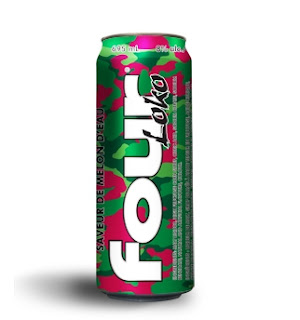 This beverage used to be a lot more controversial, as old formulations used to contain both alcohol and caffeine, and probably made some teenagers' hearts explode (but not in that My Chemical Romance-y way). The caffeine is out, but lordy, the alcohol remains.

There was no way I was going to drink this whole thing myself, lest my night turn violently shitty ridiculously quickly. So, I shared this with Drinkin'-Buddy Dave (DBD); we poured it into two glasses (not the good pint glasses, mind you) and had at it.

First impressions:
After many, many mouthfuls, you start to get desensitized to its incredible booziness; if you wait a couple of minutes and take another drink of it, it hits you anew. Finally we managed to put the rest of it away and move onto something more palatable.

I'll tell you this: if you were to drink a whole can by yourself fairly quickly -- it's 695 mL, which is about the volume of two bottles of beer (with significantly higher alcohol content) -- there's no way it won't fuck you up something fierce. I realize some people are looking for that, but I'm (usually) not. I'll stick to beer, thanks.

Email ThisBlogThis!Share to TwitterShare to FacebookShare to Pinterest
Labels: booze

I know I should be making the most of my life.

I'm young (ish), I'm hot (temperature-wise), I should be out bangin' chicks, right?

Instead, I'm re-watching season 3 of It's Always Sunny In Philadelphia.

A: Because it's god damn funny, that's why. Anytime Frank Reynolds describes a place as being "darker than a well-digger's ass," that's something I want to be a part of, as often as possible.

Also, in season 3, they really start nailing the "episode title comes up right after something totally awesome sets it up" gag. To wit: Mac, Charlie and Frank are preparing to fight boredom by shooting their own news show.

Dee, to Frank: "No, that's a bad idea. Usually when you get involved, somebody gets hurt."
Frank: "That's ridiculous. I'm just pallin'-around with the guys. How's anybody gonna get hurt?"
(pause)
title card: "Frank Sets Sweet Dee On Fire"

The timing is just fantastic. There's enough of a pause to make you wonder, Is this where the title-card joke comes in? And then, bang, it hits you, and even though you already know the title of the episode, the joke totally kicks your ass.

Yep. These are the golden years, these ones. Hooray for this moronic extended adolescence of minimal adult responsibilities aside from showing up for work, occasionally doing my laundry, and feeding myself somehow! Yaaaaayyyyy!!!!
Posted by JTL at 5:40 PM No comments: