Well, isn't this nice: someone's telling me how to vote.

To this person I say: "Go fuck yourself."

I'll vote for whoever I want to, for the reason I want to. It's my vote. Don't tell me how to use it.

I advance-voted yesterday because Monday the 27th looks like it's gonna be a busy one for me. (Actually, in a way, it's going to be pretty free-and-clear; I teach all grade 12 classes, and a shit-ton of 'em are going to be working the election. Why? They get paid $160, they get to put it on their resume and/or university application, and that looks fuckin' goooooood.)

And yes, I voted for John Tory, even though I really want Olivia Chow in charge. I voted this way because Tory is the person who has the best shot at winning who isn't named Ford (in this case, Doug Jr.). This is called "strategic voting," and I feel absolutely no remorse for doing so.

Last election, Drinkin'-Buddy Dave (DBD) and I were hanging out with some mutual friends a few days before the vote where Rob Ford won (handily), George Smitherman placed a shockingly-distant second, and Joe "Joey Pants" Pantalone barely rippled the water by placing third. The polls were all saying this before the election, although they didn't really show how big a lead Ford had on Smitherman; there was actually a glimmer of hope that Smitherman could've won.

"I'm voting for Pantalone," mutual-friend Y declared. "I don't care about the polls. Pantalone's who I want, so that's who I'm voting for." Meanwhile, of course, J, DBD, Y, his wife L, and everyone in the room (and indeed anyone who'd followed city politics for any length of time, even casually) knew that Rob Ford was a fucking idiot; exactly to what astonishing degree we'd only learn later, of course. And no, even if you put Joey Pants' and Smitherman's votes together, they wouldn't have defeated Ford's plurality -- but if the media had framed it a little differently in the last few days, maybe they'd have had a shot. (Water under the bridge, though.)

I felt Y's unilateral declaration, despite (a.) what the polls were saying at the time, and (b.) Rob Ford's obvious lunacy, stubbornly idealistic and naive. I mean, maybe, if Ford was polling at 50%, Smitherman at 20% and Pantalone at 15%, alright then, it's clear who's going to win, protest-vote for Pantalone and go home and have some ice cream. But, despite my own political leanings towards Pantalone, I voted for Smitherman, because the polls were suggesting something like 45-35-15 at the time; a longshot, but still a shot.

In short, George Smitherman was the least-bad shot at a winner.

And we all know how that turned out.

Thus, with a Tory-Ford-Chow poll running at about 40-30-20... it's close, man. Closer than it should be, if Etobicoke/North York/Scarborough knew what was fucking good for them. (Yes yes, downtown elite, sipping a latté with pinky-out, going to the ballet later tonight.) But, y'know, cautiously optimistic that Tory can hold on for a win.

This is, of course, a ludicrous thing for me to say. I've been a teacher and union activist for almost two decades, stretching back to my practice-teaching round of 1997; that fall saw the two-week walkout to protest the PC's Bill 160, which did a lot of fucked-up shit that we're still trying to undo. And who was later the leader of the Ontario PCs, who ran in Don Valley West, and who advocated for public funding of private, religious schools, and who green-lit an ad during Kim Campbell's glorious election campaign in '93 that may-or-may-not have made light of Jean Chrétien's facial paralysis? That would be one John Howard Tory.

In an ideal world, Chow's way out in front, Tory's saying some interesting things but has no shot, and the Fords are out somewhere calling people "kikes" or whatever it is they do for fun. Instead, we've got Doug Fucking Ford handing out $20 bills, people in TCHC buildings impressed with his little dog-and-pony show (and apparently voting for Fords in crazy-high turnouts), and now I've gotta burn my vote on... John Tory.

...and they say municipal politics are boring.
Posted by JTL at 1:08 PM No comments:

Email ThisBlogThis!Share to TwitterShare to FacebookShare to Pinterest
Labels: elections

My undying love and/or lust for Mindy Kaling continues to burn like a million suns.

It's not the lyrics, it's the voices.

I've made no secret in the past that I would prefer an instrumental song to one with lyrics -- and I've thought that it's because I genuinely don't care about what the singer's singing about, because they're usually singing about love, and isn't that weird topic to alllllways be singing about?, and who the fuck cares about you, I don't know you, why should I give a rat's-ass? (P.S., I don't.)

But I really think it's because a lot of singing-voices can get in the way of a good song.

In the past 20 years or so, in the post-vinyl, CD-cum-MP3 era of recording technology, engineers have been able to push recorded music louder and louder, because of the lack of any sort of physical constraint (i.e. needle in record groove). This is called the loudness war, and it's awful; I've written about it before, I'm sure.

A consequence of this is that, well, let's say there's a part of a song where there's only an acoustic guitar or a piano, and someone's singing on top of it. Because of ProTools and all other sorts of digital wizardry, that part of the song can be cranked-up so that its maximum volume reaches the same heights as the song's crescendo, which (a.) makes the vocals at the start crazy-loud, and (b.) detracts from the overall emotional response of the entire song, as studies have shown.

Two songs come to mind, both of which have female singers. I don't think this is a coincidence.

After a torturous search through YouTube, I found the Katy Perry song I was looking for. It's called "Firework," and the pre-chorus (e.g. starting around the 46-second mark) is the part I'm talking about here. I mean, the rest of the song is shit as well -- and, after listening to a half-dozen other song-snippets from her, sounds exactly like every other fucking song she's ever done -- but this is the part that, if the office-rock station is playing in our school's office, makes me want to run out of the place screaming.


It's so. god. damn. loud. And it forces you to stop whatever you're doing and listen to her inane musings. (Actually, it took five fucking people to write that song.)


Adele's stock-in-trade is her voice. And I'll say this, it's actually a pretty good one, as far as voices go; somewhat soulful, pretty clear, all that jazz. (Hard to say how much of that is studio wizardry; if I cared more I could look up a live performance, but I don't.) But at the very start, that voice just pierces through the fog like a laser beam, the bass drum comes in and starts mashing-away, and since everything's loud in the chorus, the thing that should stand out -- namely, the crack of a snare drum -- is just entirely lost in the mix. The whole thing's a mess.

But hey, she sold a ton of records, so apparently I'm the one who's messed-up.

Just so you don't get the impression I hate everything about chick singers...

I think in pictures, so I went and made some. Here's how Adele's song is put together, sonically: 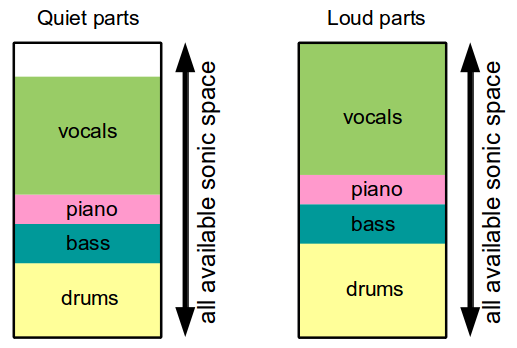 The so-called quiet parts (i.e. during the verses) are already really loud. When you get to the parts that are supposed to be loud (e.g. the chorus), where can you go? Nowhere, I say. So the dynamics -- the loud-soft interplay that bands like Nirvana had down to a science -- get entirely washed-out, and the whole thing sounds like bleh.

In contrast, here's how Aretha's song is mixed: 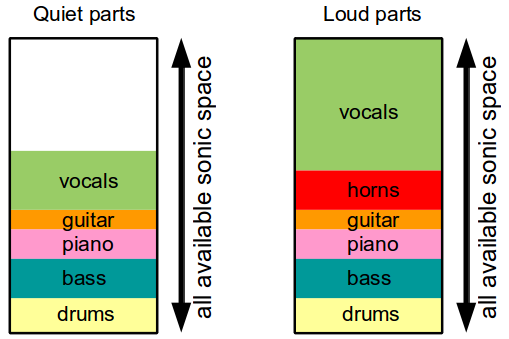 When it's supposed to be loud, it definitely is. But when it's not, it's not; there's room to breathe. And because that part is quiet, you know there's a loud part coming up, and that builds tension... What's the loud part going to sound like? How's it going to be different? Lyrically, how's she going to sum it all up in a chorus which is clearly the most important part of the song? It's this back-and-forth, this dynamism, that makes the song sound interesting, even if you don't pay attention to the lyrics at all (which, as has been mentioned before, I usually don't).

Also, "I Never Loved A Man" was written by one person; a guy, oddly enough.

In conclusion, the baseball game's starting, time to go watch the Tigers meekly bow-out of the playoffs.
Posted by JTL at 12:47 PM No comments: