But, trading Fielder to Texas for 2B Ian Kinsler opens up some interesting options. Consider...
Add to this the fact that, over the weekend, I bought planet tickets and reserved both hotel and car for a Florida spring training trip in March, and... baseball's back, baby!

Well, Mayor McCheese has decided to stick around, "move forward," and not go anywhere. 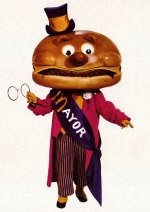 It's inconceivable that he wins next year; Fordites have been interviewed all over the place, and a lot of 'em are of the opinion of, "Well, I support him, but he should take a leave of absence, at the very least."

Council -- even his traditional allies -- turned against him months ago. He couldn't get an agenda through 100 Queen West if he put it in the back of a dump truck and rammed through the front doors. And, he's an international embarassment.

But no, there were the Brothers Ford this afternoon on CFRB, on their weekly straight-to-the-taxpayers media outlet, proudly stating that Mayor Fat Fuck isn't going anywhere. Furthermore, they thanked all the people who have called or written to them and offered support.

Look, there are plenty of things that I dislike which, apparently, lots of other people love:
And I can see why someone might find each of those things appealing, for the most part. Hell, I can even see why someone might like Stephen Harper, at least on the surface. That's because each of the items listed above does have, even if it's hard to see, some sort of redeeming quality which outweighs all the other negatives.

Rob Ford, on the other hand... well, I can see how his "I fight for the little guy" rhetoric could be appealing. But then when you look at all the horrible stuff he's said and done over the past couple of decades, (a.) it easily outweighs any sort of oft-trotted-out platitudes he trumpets every chance he gets, and (b.) even if he does do as he says, you can't help but question plenty of other choices he's made in his life with clearly hamper his ability to be a successful office-holder.

Last night at a banquet dinner for our slo-pitch team, I sat with a teammate -- a Toronto police officer who works in Etobicoke, no less -- and we came up with a list of easily 15 really big, really public, really awful things that Ford has done. And we just sorta shook our heads and pronounced ourselves amazed that this guy is (still) the mayor of the fourth-largest city in North America.
Posted by JTL at 11:39 AM No comments: